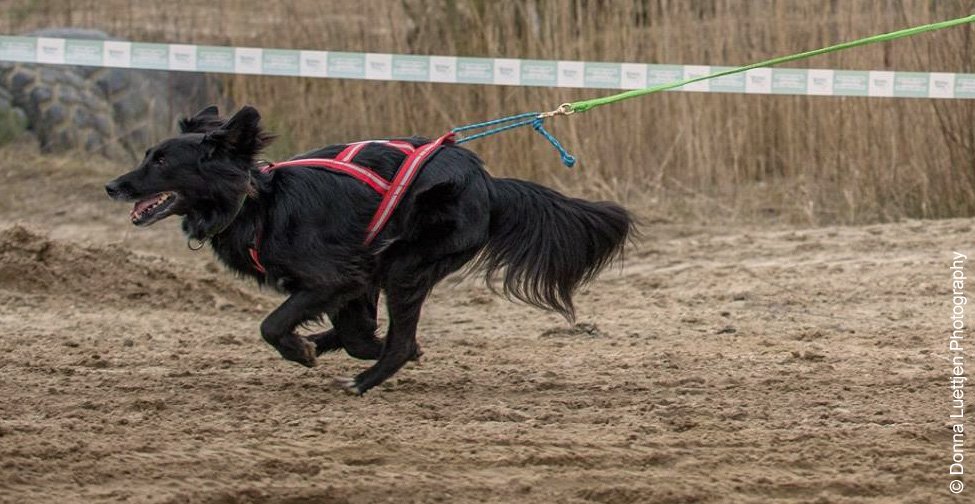 Being out in nature. For dog owners daily routine. Many use the “being outside” to go jogging together with the dog. The dog either runs free or is on a leash. A particularly sporty variant of “running with the dog” is Canicross. A sport that has many facets and makes a sporty team out of humans and dogs.

Canicross is an artificial word and is composed of the word Canis (Latin for dog) and Cross, in sport a term for “terrain” or “cross-country”. In canicross humans and dogs do not only run together, in canicross the dog pulls the man. In its pure form, canicross is a sport that demands a lot from the people. The running style changes fundamentally and shifts strongly to the forefoot, the flight phase becomes longer and the athletes reach much higher speeds than without a dog.

What do I need for Canicross?

„In Canicross, a flexible leash connects human and dog. The Jöringleine (or jerk line) prevents the dog from being exposed to too much jerk while running”, explains Anne Röhling, freelancer at pedag and passionate train dog sportswoman.

When canicrossing, humans wear a special hip belt, with leg loops that optimally absorbs the dog’s pull. Commercially available “jogging belts” are not suitable for canicross because they usually sit in the waist and only make sure that the dog’s hands are free when running. A canicross belt sits very low on the hips.

The dog wears a pulling harness when canicrossing. These harnesses originate from the sled dog sport – the origin of the Canicross. A canicross harness runs over the whole body of the dog. The pressure point is at the sternum, the pressure is led laterally over the chest of the dog to the root of the tail, where the pulling point is. There the leash is attached to the harness with a carabiner. A well-fitting pulling harness is essential for this sport. A normal harness is not suitable and endangers the health of the dog.

Good shoes are also essential for canicrossing. „I run with trail shoes that have a good tread. They look pretty worn out after every run, because canicross is a winter sport. I don’t train at temperatures above 18 degrees, before that only short distances. I clean my shoes afterwards with the pedag Combi Set. Lather them properly, rinse them and they are clean again – until the next run.“

Which dog is suitable for Canicross?

„In canicrossing, you can now find many different breeds of dogs. From small to large, everything is possible as long as the dog is willing to run, enjoys pulling and is healthy. I run with a Border Collie Mix and a Setter Mix dog. Of course you can’t compare their performance with the performance of train dog breeds like Huskies or Hounds. But it’s still fun to run Canicross together with them.“

Canicross can be tough

„Canicross is for me the most beautiful form of train dog sport with a dog. Human and dog are so close, so directly connected. Running to the finish line together in a race, the happiness in the face and the exhaustion in the legs, is for me one of the most beautiful experiences you can have in this sport”, says Anne.

„Canicross can be really tough, though. Especially if you’re not particularly fit. I learned that at my first start with a friend’s Husky, which is very strong in pulling, at a race. I ran the five-kilometer course as fast as I have never run five kilometers before. But I also had sore muscles right after the finish and could hardly run anymore”, Anne tells about her start at the sled dog race in Klaistow near Berlin.

„Currently I am in a training condition in which I would not dare to go into canicross with a strong dog. The strain is too high for the body. I have two very light dogs, but they also want to run fast when they have to pull. And that’s something I can’t keep up with at the moment. Ideally, in canicross, you run at the dog’s pace“, Anne continues.

There is Canicross but also in a slightly different form. As obstacle course for humans and dogs. Organizers like Camp Canis or StrongDog offer such events, where teams of several people and dogs walk or run a course together and overcome obstacles. Always according to the motto: Everything can, and nothing is a must. The distances vary between five and 15 kilometres, but longer runs with dogs are also possible.

„Obstacle courses with dog are something very special. At Camp Canis as well as at StrongDog I have already started with my dogs. At the beginning of 2019 for the first time with my shy dog Mette. She is often insecure and very careful, you cannot call her a daredevil. At Camp Canis she showed me what she is made of and what she dares to do when we tackle things together”, reports Anne.

The obstacle courses are less ambitious than pure canicross races and are also suitable for athletes who have just started canicrossing or athletes who are less concerned with reaching top speeds than with the shared experience with a dog.

„Across the canicross I quickly got to the bikejöring and the dogscooter. Especially for the training of the dogs this form of train dog sport is ideal. Light dogs can be supported better on the bike than in canicross and strong, fast dogs can be trained better on the bike by less experienced runners without risking their own health. I switched to the scooter at the beginning of my canicross “career” because the unusual strain of canicrossing gave me shin-edge syndrome. Whoever starts out with the canicross should do so in a measured way,” Anne therefore advises.

In bikejöring, the person sits on a bicycle, usually a mountain bike. The dog wears a pulling harness and the dog is connected to the bike by a longer jöring line. The leash is attached to the frame of the bike and runs forward through a leash guide. The so-called bike antenna prevents the leash from getting into the front wheel if the dog stops abruptly or does not pull constantly.

Bikejöring is a fast sport, where a fine communication between human and dog is enormously important. Fractions of a second and the quick reaction to dangerous situations decide whether a fall or a smooth ride. The dog-human teams can reach speeds of up to 40 km/h. “When it comes to bikejöring, I have the sports insole pedag Power in my shoe. I use a trail shoe with a relatively firm sole for optimal power transfer from foot to bike. The sole stabilises my foot during this process.“

Another variant of the train dog sport with only one dog is the Dogscooter. At official races it is also driven with two dogs in the team class. The Dogscooter is a cross-country scooter, on which the sportsman stands or squats or on which he helps by strong “kicks” into the ground. This so-called pedalling looks a bit like the scooter driver kicks backwards.

Whoever deals with Canicross, will soon come across its origin, the sled dog sport. While Canicross is a so-called monosport – thus a human with only one dog – only larger teams are at the start with the husky sport. One mostly drives on the training car, a four-wheeled car on which the husky handler (called Musher) stands due to the weather conditions in this country.

„It is impressive to be on a race and to experience the big teams. The energy that the animals have, the urge to want to go and finally be allowed to run. It’s contagious, but it also takes a bit of getting used to,” reports Anne.

„Through sport you quickly get to know people, including mushers with many dogs who feel more at home on sleds. In March I fulfill a dream and go to Sweden with friends, to the snow, to visit a friendly musher and his dogs. The first time a team on the sled in the snow drive. I have been told that this will be an unforgettable experience: The man, the dogs, the silence, the space and the snow.“

We will report about it here in our blog.

Anne Röhling, freelancer at pedag and passionate train dog sportswoman. She started out with canicross and now mainly runs bikejöring and dogscooter with her two mixed-breed dogs. She is the 2nd chairwoman of the sled and train dog sports club Hauptstadt Canicross.